Three peaks and a Domed House 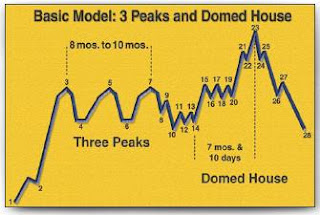 The Three Peaks and the Domed House pattern was developed by George Lindsay in the 1950's. This is a fairly complicated pattern where there is a basically a combination of a triple top and correction and then a rounded top or a head and shoulder pattern. The reason it is particularly useful is because it serves as a pattern to watch for after triple top set ups or the inverse in the case of triple bottoms.
Posted by Author at 5:20 PM 8 comments:

Ascending Triangle on the DOW 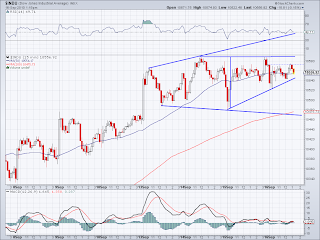 There is an Ascending Triangle pointing to 1137 which also coincide with the upper Megaphone trendline and a inverse H&S pattern. So I am day trading short positions now and maintaining my FXI hedge.
Posted by Author at 12:56 PM 3 comments:

This pattern occurs because the lows are moving increasingly higher but the highs are maintaining a constant price level.
The pattern will have two highs and two lows, all touching the trendlines.
This pattern is confirmed when the price breaks out of the triangle formation to close above the upper trendline.
Volume is an important factor to consider. Typically, volume follows a reliable pattern: volume should diminish as the price swings back and forth between an increasingly narrow range of highs and lows. However, when breakout occurs, there should be a noticeable increase in volume. If this volume picture is not clear, investors should be cautious about decisions based on this Triangle.

Following are important characteristics about this pattern.

Occurrence of a Breakout
Technical analysts pay close attention to how long the Triangle takes to develop to its apex. The general rule is that prices should break out - clearly penetrate one of the trendlines - somewhere between three-quarters and two-thirds of the horizontal width of the formation. The break out, in other words, should occur well before the pattern reaches the apex of the Triangle. The closer the breakout occurs to the apex the less reliable the formation.

Duration of the Triangle
The Triangle is a relatively short-term pattern. It may take between one and three months to form.

Shape of Triangle
The horizontal top trendline need not be completely horizontal but it should be close to horizontal.

Volume
Investors should see volume decreasing as the pattern progresses toward the apex of the Triangle. At breakout, however, there should be a noticeable increase in volume.

HOW TO TRADE THIS PATTERN

CONDITIONS THAT SUPPORT THIS PATTERN

Support and Resistance
Look for a region of support at the lowest low and a line of resistance at the top of the Triangle.

CONDITIONS THAT WORK AGAINST THIS PATTERN

No Volume Spike on Breakout
The lack of a volume spike on the day of the pattern confirmation is an indication that this pattern may not be reliable. In addition, if the volume has remained constant, or was increasing, over the duration of the pattern, then this pattern should be considered less reliable.

Short Inbound Trend
An inbound trend that is significantly shorter than the pattern duration is an indication that this pattern should be considered less reliable.

This pattern with its increasingly higher lows and constant highs indicates that buyers are more aggressive than sellers. The pattern forms because of a supply of shares is available at a fixed price. When the supply depletes, the shares quickly breakout from the top trendline and move higher. This pattern is usually found in the 4th wave of a an Elliott Wave 5 Wave Impulse Pattern.
Posted by Author at 12:51 PM 2 comments: